The White House Correspondents’ Association announces the winners of its 2021 journalism awards for work done in 2020, dominated by reporting on former President Trump’s handling of the Covid pandemic, his actions during protests against racial injustice, the 2020 presidential election, and an in-depth investigation of the violent use of police dogs.

The winners for presidential news coverage include journalists from the Washington Post, the Associated Press, ABC News and Getty Images.

The winner for the second-ever Katharine Graham Award for Courage and Accountability, which recognizes work of an investigative nature and national significance that can extend well beyond the White House, is a team that included The Marshall Project, AL.com, the IndyStar and the Invisible Institute.

“In a most challenging year, the role of a free and independent press was more vital than ever,” said Zeke Miller, president of the association. “The WHCA is proud to recognize these intrepid journalists who skillfully and unflinchingly kept the public informed when they needed it most.”

The Washington Post’s Philip Rucker covered the White House with the instinct of a reporter, the narrative mastery of a writer and the analytic skills of a historian. His long-form reports during the final year of the Trump Presidency—ranging from the pandemic to impeachment to social unrest—were uniformly outstanding. They broke news, were well sourced and helped created a deeper understanding of the norm-breaking President.

Rucker, the then White House bureau chief for the Washington Post, stood out among many worthy competitors for the Beckman award. Under Rucker’s leadership, the Post’s team consistently turned out exemplary work in the most competitive beat in journalism.

Michael Balsamo broke the news that Attorney General William Barr was on his way to the White House to tell President Donald Trump that the Justice Department found no evidence of widespread fraud in the 2020 elections that would change Joe Biden’s victory. Thanks to tireless source work and a year of preparing for contested election by Balsamo, Barr agreed to meet with him before heading to the White House. Balsamo had only a few minutes to dictate a news alert, breaking the news before the president was informed, and quickly followed up with a complete story, rich in detail and context, truly in the tradition of Merriman Smith.

It is stunning when any president is rushed to the hospital. But when it comes hours after the president admits he has tested positive for COVID-19, it is high drama. The news that President Donald Trump would be airlifted to Walter Reed broke an hour before the “World News Tonight with David Muir” live broadcast. Jonathan Karl raced to the hospital while continuing to gather information up until airtime. He went live just after Marine One landed; his thorough, authoritative report provide clarity while noting the minimal amount of official information available. It dominated the newscast at 6 minutes, 47 seconds. It is an outstanding example of deadline reporting under pressure.

THE AWARD FOR EXCELLENCE IN PRESIDENTIAL NEWS COVERAGE BY VISUAL JOURNALISTS

A powerful picture that captures the place and the personalities that collided over COVID-19. Trump’s mouth is open. He’s talking. He’s out of focus. Fauci’s eyes are closed; he’s bearing it, in the background. But he prevailed as the dominant personality on issues of fact, science, and medicine. This image captures the dynamic, the emotion, and the stakes that played out both publicly and, even more consequentially, privately as America stumbled through the pandemic. 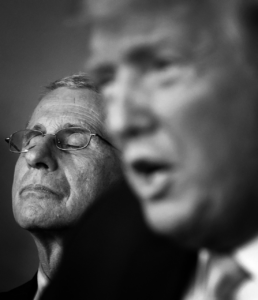 THE KATHARINE GRAHAM AWARD FOR COURAGE AND ACCOUNTABILITY

Winner: The Marshall Project, AL.com, the IndyStar and Invisible Institute for their series, “Mauled: When Police Dogs are Weapons.”

The team’s penetrating look at the unregulated and often abused use of canine units by local police departments on typically nonviolent, nonthreatening victims couldn’t be more timely or relevant. Reporters assembled a national database of disparate records from reluctant police departments and tracked down the victims who carry the physical and mental scars of police dog attacks. At a time of intense national debate on police behavior, the team brought attention to an overlooked element of policing and started a conversation that has already led to change by some agencies.

When Police Violence Is a Dog Bite

‘The standard for being the worst’

Police wanted ‘a dog that would bite a black person”

Her work on how Covid struck the White House was a public service, revealing who was testing positive despite administration efforts to maintain secrecy. Jacobs owned this story with breaking news and deeply reported accounts about the virus outbreak on the White House campus.

Among many powerful interviews with President Trump, one stood out for tenacity, headline-making and live fact-checking. Swan’s ground-breaking interview for Axios on HBO not only captured global attention but will resonate for decades to come.

Eli Stokols’ sharp instincts kicked in shortly before 1 a.m. Oct 2 when he saw a tweet from President Donald Trump saying he had tested positive for coronavirus. Within an hour – the 2 a.m. deadline for the Los Angeles Times – Stokols’s story was published and provided readers not only the news that the president had COVID-19 but the context of potential repercussions, fluently written, and even found a quote for a doctor on TV earlier that evening. The Los Angeles Times replated to get the story on its Oct. 2 front page.

As soon as she learned of President Donald Trump’s tweet that he and first lady Melania Trump had tested positive for the coronavirus, Tamara Keith started working the phones to get information beyond the official statement from Trump’s doctor. She reached a senior White House official as well as a spokesman for Vice President Mike Pence. By 5 a.m. she was on the air with a compelling and detailed report that clearly and without alarm explained what people needed to know about the president’s condition and its ramifications. She included good details, like a sound bite of from the week’s presidential debate and the news that Pence’s COVID-19 test was negative.

In charge, at the desk, about to affix another presidential signature, this image tells the story of the Trump presidency: glaring, in command, silencing those who might dare speak out. This image suggests the autocrat at work, the dominant personality staring down an unseen audience.

ProPublica’s “Inside the Fall of the CDC” stands out for its remarkable detail and the relentless digging by reporters who were able to outline in painful detail the harm that politics had on the handling of the pandemic – as well as the damage to a storied, and once-trusted, institution. The stories also serve a timely reminder of the importance of having knowledgeable, well-sourced reporters who are there to play the watchdog role.

The judges recognize CBS News for the compelling 48 Hours report, “Justice for All.”  The CBS News team clearly met the Graham Award guidelines for covering an issue of significant national or regional importance with a comprehensive look at race relations in America. The report aired on the day that George Floyd was buried.  It vividly informed the country on why, as the broadcast concluded, “justice for all is still an unfulfilled promise.”