Meet the next generation of journalists fighting for first amendment freedoms 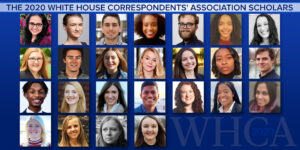 The White House Correspondents Association is pleased to announce our college scholarship winners for 2020.

“Our 25 WHCA scholars this year are an impressive and ambitious group that should give us all hope for the next generation,” said WHCA president Jonathan Karl. “These are students from diverse backgrounds who have already accomplished a great deal.  I have no doubt they will go on to do great things in journalism or whatever path they choose to pursue.”

The WHCA began awarding scholarships in 1991.  Since the association started helping journalism students in 1991, it has awarded more than $1.4 million in scholarships, and leveraged another $1.2 million in aid.

The scholarships are financed by proceeds from the annual White House Correspondents’ Dinner and donations to the WHCA.  This year we are especially grateful for donations from ABC News and Fox News.

Alexandra Ellerbeck is a graduate student in journalism at American University and a fellow at the Center for Public Integrity. With a background in human rights, she was the North American Program Coordinator for the Committee to Protect Journalists and has written for the Columbia Journalism Review, the Washington Post, Foreign Policy, Globe and Mail, Religion News Service, and The Progressive. Her goal is to tell true stories that hold people and institutions accountable.

Kara Harris is a Senior at Arizona State majoring in Journalism and Mass Communications. She is an active member of the National Association of Black Journalists and the National Collegiate Scholars Association and has covered stories on hate crimes in America, restoration of voting rights for convicted felons, and racial disparity amongst women of color during childbirth. Kara would like to ultimately become a network news executive producer for a primetime nightly news show.

Megan Boyanton is a graduate student at the Walter Cronkite School of Journalism and Mass Communication at Arizona State University. She has reported on a variety of issues including LGBTQ+ figures, the Venezuelan refugee crisis, Islamophobia, and gender violence. Her ultimate objective is to work as a foreign correspondent in long-form print and digital journalism, writing about social issues affecting misrepresented and ignored international communities.

Miranda Faulkner graduated in 2019 from Arizona State with a degree in Journalism and Mass Communications. The first in her family to finish college, the native of Puyallup, Washington, hopes to cover politics and social issues.

Mythili Gubbi is a graduate student at Arizona State and recipient of the Trust in Reporting Scholarship. She published a young adult fiction novel called Kiaras Tiara at the age of 16 and had an award-nominated Indian music and culture radio show on her college station. Hailing from Bangalore, India, Mythilis goal is to tell stories that matter, whether that is as a broadcast reporter, radio host, or author.

Fatma Khaled is a graduate student pursuing a degree in Journalism and is the recipient of Qalaa (Citadel) Scholarship Foundation Award. A native Arabic speaker, she covered the political turmoil in Egypt in 2013 and has reported on different beats in the country including women’s issues, press freedom, and minority rights for different outlets, including The Globe Post and Washington Report on Middle East Affairs. She has experience in business reporting with focus on the impact of state economic policies on financial markets and business sectors including real estate, trade, and entrepreneurship.

The Harry S. McAlpin, Jr. Scholarship is named for a former White House Correspondent who was the first African-American to cover a presidential press conference in spite of WHCA opposition at the time.

Samantha Chaney is a Junior majoring in Broadcast Journalism. She has interned at WHUR Radio, Fox 9 KMSP-TV in Minneapolis, MN and at CBS Evening News with Norah ODonnell. Samantha aspires to attend Columbia Universitys M.S./J.D. dual degree program, becoming a political correspondent and legal commentator for a major news network.

The Cokie Roberts Scholarship is named for the veteran Congressional and political correspondent for NPR, PBS and ABC News

Jessica Grider is a Junior majoring in Broadcast Journalism and a Howard University Capstone Four Year Academic Scholar. She has interned at the BBCs DC Bureau and is currently a College Associate at Fox News Channel, covering events in the Capitol Building. She published an article, Serving After the Storm featuring the hungry families that were in urgent need of proper aid after major food stamp cuts complicated hurricane relief in Puerto Rico.

Donovan Thomas is a Baton Rouge-by-way-of-New Orleans Sophomore majoring in Journalism. He is the President of the Howard University Ida B. Wells Society, the sole student chapter of the national organization. His first journalism gig was in fifth grade and he plans to continue that career path upon graduation.

The Hugh S. Sidey Scholarship in Print Journalism is named for a former White House Correspondent and co-sponsored by the WHCA and White House Historical Association

Olivia Benjamin is a Junior majoring in Public Relations. She was a marketing/social media intern for Kohls Professional Kicking Camps and a communications intern for the College of Engineering at Iowa State University and is currently a communications assistant for the Greenlee School of Journalism and Mass Communication. Her dream job is to work in crisis communication in politics.

Silvia Martelli is a Northwestern University graduate student from Milan, Italy. Silvia would like to cover Capitol Hill and hopes to become a White House correspondent or a foreign correspondent.

The Deborah Orin Scholarship is named for a former White House Correspondent.

Sam Cabral is obtaining his Master of Science in Journalism, with a Politics, Policy and Foreign Affairs specialization. He would like to pursue a career in broadcast journalism, bringing a diversity of identity and perspective to field reporting. Sam would like to cut his teeth as a video or multimedia journalist, ultimately becoming an anchor.

Mark Satter is a native of Washington DC and a graduate student at Northwestern. Upon graduating, Mark plans to cover politics and national security from Washington.

Ashton Nichols is a junior working on degrees in Journalism and Economics. She is the current long form and investigations editor for The Post, Ohio University’s independent student newspaper, and has previously interned on the business desk of The Columbus Dispatch, as a data intern for The Ohio Center for Investigative Journalism, and Cincinnati Magazine. Ashton hopes to work abroad in the future and aspires to be a financial journalist and cover topics relating to business and economics.

Maggie Prosser is a Junior Journalism major and serves as the editor-in-chief of The New Political, an award-winning, independent and nonpartisan publication at Ohio University that covers state and local politics. She has interned at The Columbus Dispatch reporting on state government as an E.W. Scripps fellow, and was a beat reporter for The Chautauquan Daily where she was recognized as the 2019 Ernest Cawcroft Journalism fellow for excellence in community journalism. This summer, Maggie will be interning on The Philadelphia Inquirers news desk.

Cole Daniel Behrens is a Junior majoring in Journalism. He is managing editor in a student publication at Ohio University, The New Political, and does freelance work for The Athens News. An Ohio native, Cole hopes to pursue a professional career covering Ohio politics and public affairs.

Brett Simpson is a graduate student. She is a 2019 National Press Club Feldman Fellow, a 2019 Council for the Advancement for Science Writing Fellow, and a Graduate Researcher at the Investigative Reporting Program. Brett hopes to cover the nexus of health, the environment, and global climate change as a print and audio science reporter.

Emma Bascom is a junior majoring in Journalism. She is the associate news editor, copy editor, and former public safety reporter at the University Daily Kansan and has work currently displayed as part of a presentation about womens suffrage. In the future, Emma hope to continue her work as an investigative reporter and storyteller.

She is a Society of Professional Journalists Scholarship Recipient (SDXDC Chapter), a Member of the National Society of Collegiate Scholars, Treasurer for the Caribbean Students’ Association, and a member of the National Association of Black Journalists. April is interested in sports reporting, anchoring, and/or commentating with a special interest in football, basketball and tennis.

Karina Zaiets is in her second year at the University of Missouri, focusing her studies on Environmental Journalism. A Ukrainian, she is a Fulbright award winner and wants to renew and reinvent science journalism in Ukraine.

Katherine (Katie) Parkins is a graduate student and has reported on politics from the county level for Colorados largest local media outlet, from the state level at Missouris capitol, and internationally from the capital of the European Union. She was a regional reporter for ProPublicas Electionland project in 2016 to identify voting problems across the Midwest and fact checked Missouri politicians claims for PolitiFact in 2017, creating Missouris first-ever governor promise tracker. Currently working for Face the Nation, her career goal is to become a television producer, eventually an investigative producer, ultimately creating her own political news program.

Rosemary Belson graduated with a Master of Arts in Journalism in December. While a student at the University of Missouri, she reported and produced podcasts at KBIA, Columbias NPR affiliate, and was a supervising producer for KBIAs international news program, Global Journalist. She has interned at Politico Europe, The Wire in New Delhi, and WKOW, the ABC News station in Madison, Wisconsin. Now working at Slate Magazine, Rosemary hopes to tell impactful and engaging audio stories that help the public stay informed.

Will Jarvis completed his M.A. in Magazine Writing in 2019 and is current a Producer at National Public Radio. He was a contributing writer for 5280 Magazines The Art of Dying Well, the 2019 National Magazine Award-winner in Personal Service category, and the winner for the Associated Collegiate Press Sports Story of the Year in 2016. Will hopes to someday write for magazines or outlets that value off-the-beaten-path reporting.

Elizabeth Elkin is a graduate student at the Missouri School of Journalism, studying investigative reporting and magazine writing. Currently a breaking news intern at Bloomberg, she has been editor-in-chief of Mizzou’s city magazine, a state government reporter for the local paper, covered Congress as a Bloomberg Government intern, a digital news intern at CNN, and interned for the German Press Agency. Elizabeth received her undergraduate degree from Alabama, where she was editor-in-chief of the student newspaper and the honors college magazine and spent two years reporting and producing for a local television station.

Samuel Manas is a graduate student and the recipient of the Missouri Associated Press Media Editors first place award for Spot News (2018) and the Missouri Press Association Best News Story (2018). He has covered subjects ranging from local homicides to proposed prescription drug medication regulations and has also worked building products and proposing business plans for newsroom products. Sam would like to cover policy and work abroad covering climate change and other issues, ultimately running a newsroom.